Opening up my sketchbook and blogging about its contents is a curious process - it feels both exposing and illuminating. The white flash of the scanner is pretty scary – it moves my drawings from something tangible and real to an image on a screen. 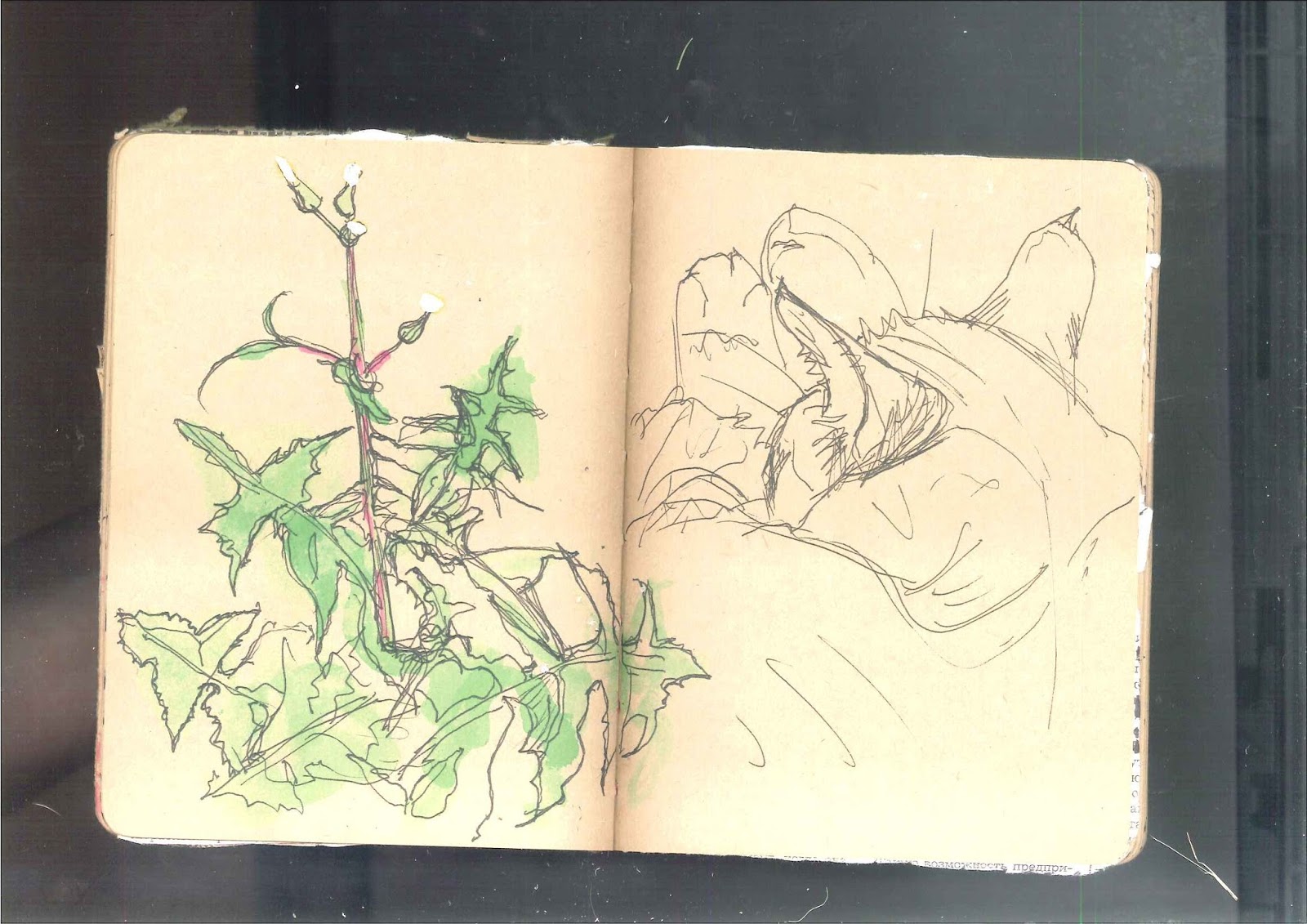 July 2013
I carry my sketchbook in my bag with me most days, just holding it gives me reassurance, the kind my mum gets from her rosary and prayer book. I prefer cheap, small brown paper sketchbooks from paperchase – this stops it being intimidating, I like the fact that something so cheap can come to hold so much value for me. I use a black brush pen, white paint pens, and washes of coloured inks. I scribble away from observation and tidy things up later at home, adding colour washes where it seems right. I never work in pencil – its too weak, if I really loathe something I’ve drawn in pen I can usually work into it, or worse case scenario, stick something over it.
﻿ 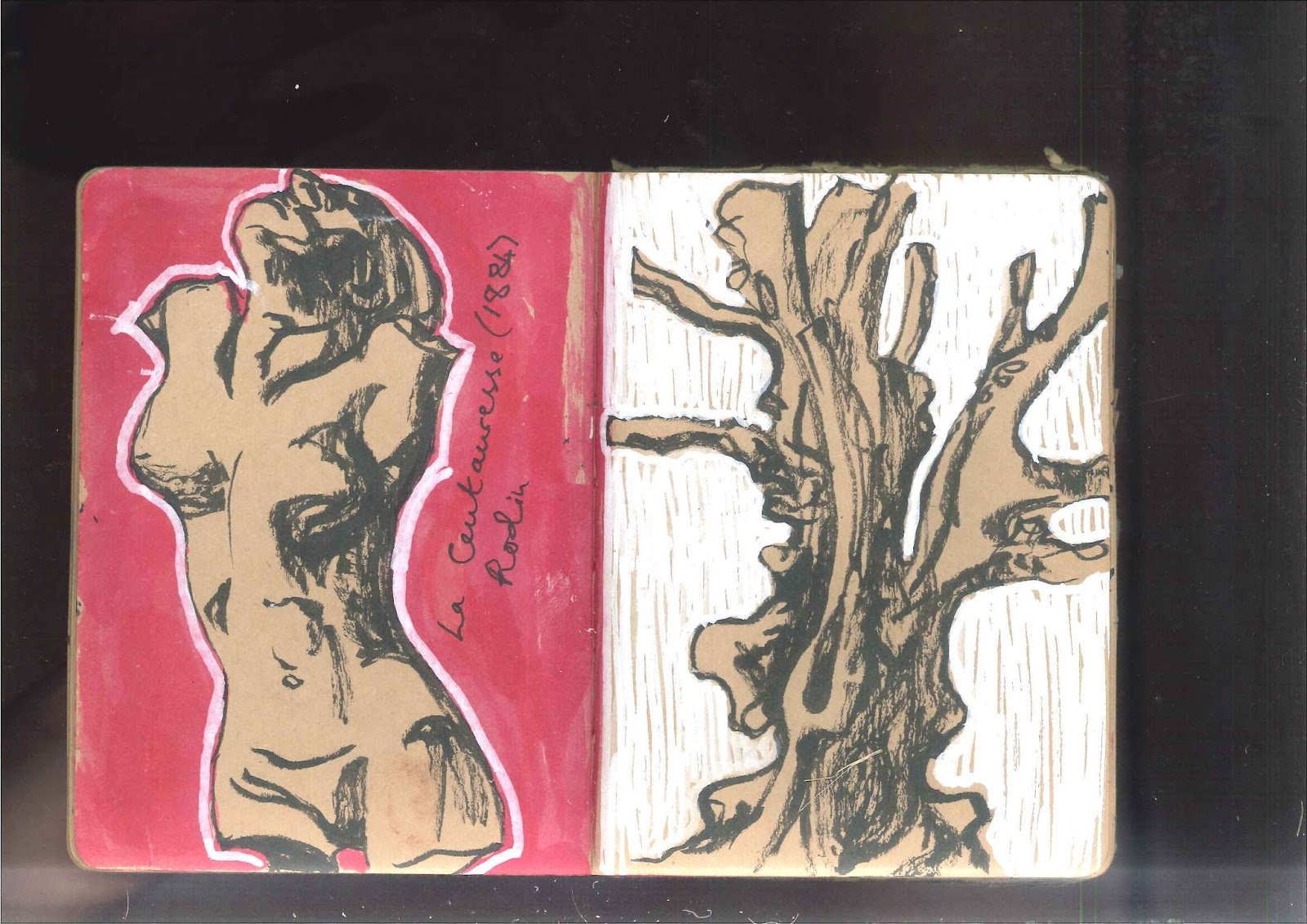 ﻿My favourite subjects are people, faces and bodies, but when they are unavailable, trees and weeds, are a good substitute - they have the complexity of form and grace which are satisfying to draw. 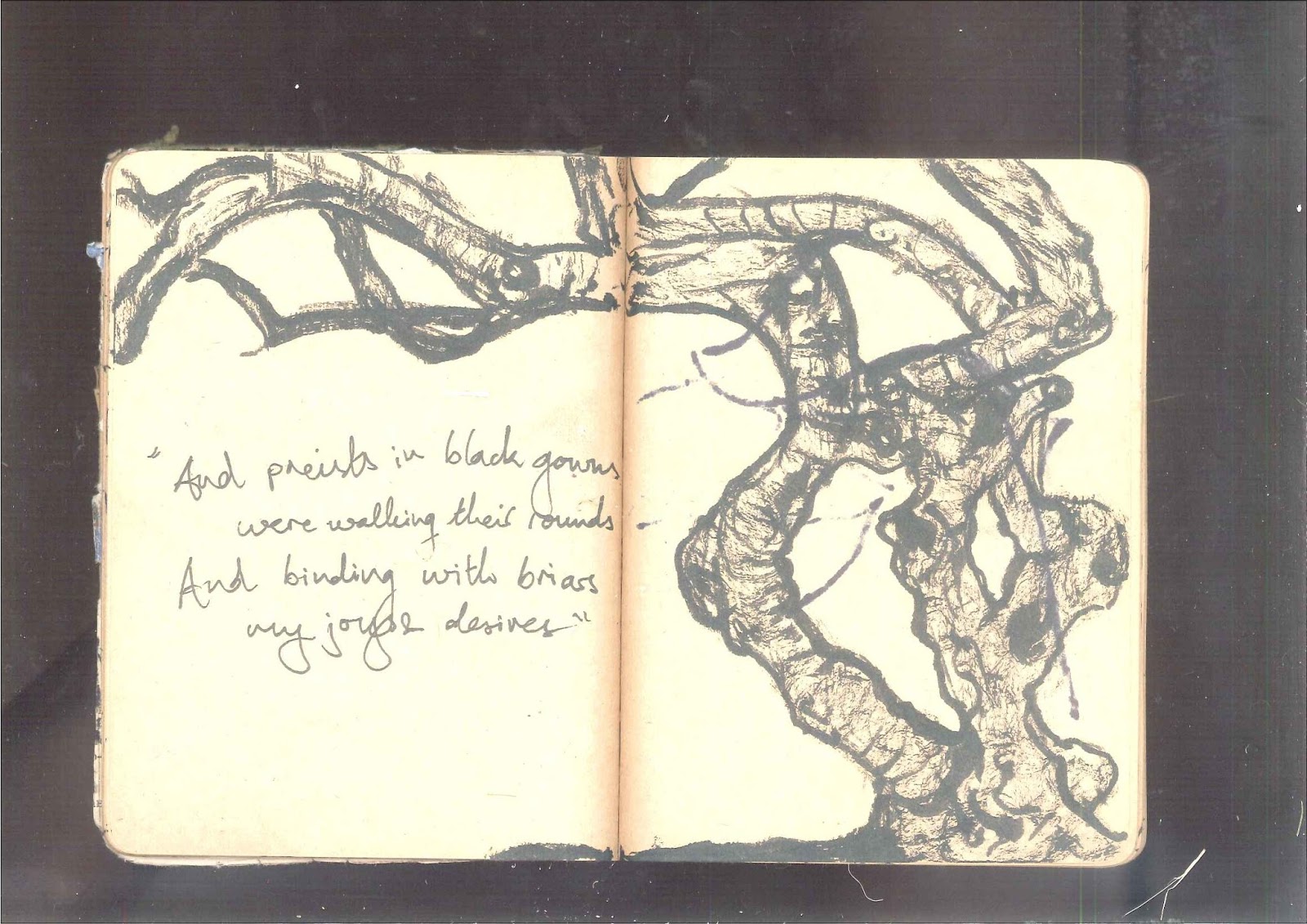 It would be simplistic to say my sketchbook is like a journal – it does record particular place and time, memories, but it is more than that. It is not an end in itself, a pretty ‘art book’, but a kind of filter or tool for studying the world. Drawing is an exercise which makes me focus, analyse, it quiets the stream of my thoughts. The goal is not the drawing on the paper – but the understanding which it brings. If I wish to understand something or someone, the first thing I do is to try to draw them. The process is not over when I set my pen down – I return again and again to my sketchbooks, working into them, picking out images to take beyond the sketchbook – to embroider, or print, or sculpt. 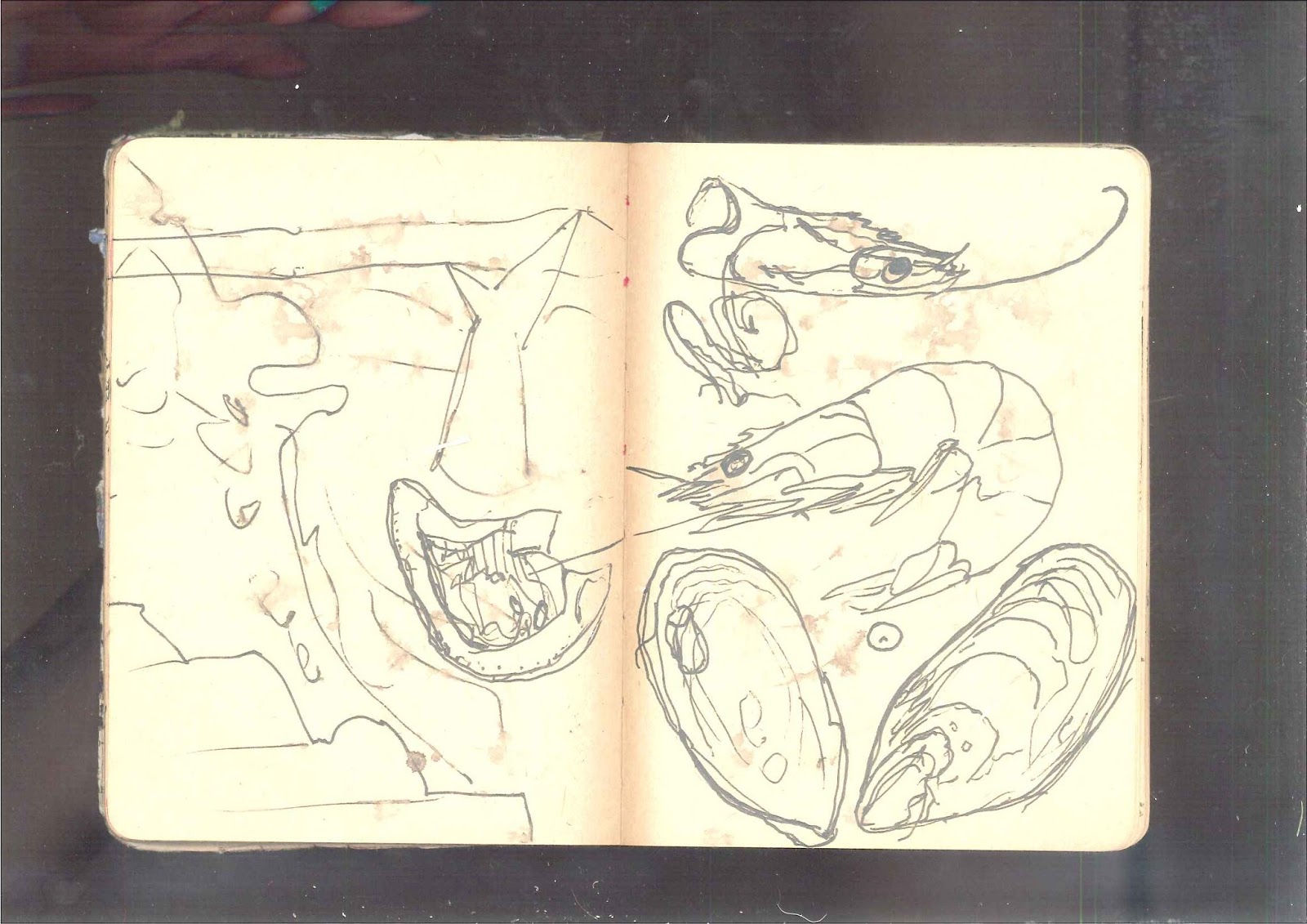 I have become less and less self conscious about drawing in public – occasionally in galleries you will get people peering over your shoulder, but mostly you pass unnoticed. Drawing in the theatre is fine (although hard to see in the dark). My ultimate goal is to be bold enough to draw people on the tube. So far the nearest I have come is ask someone if I could take their picture and then draw from that. 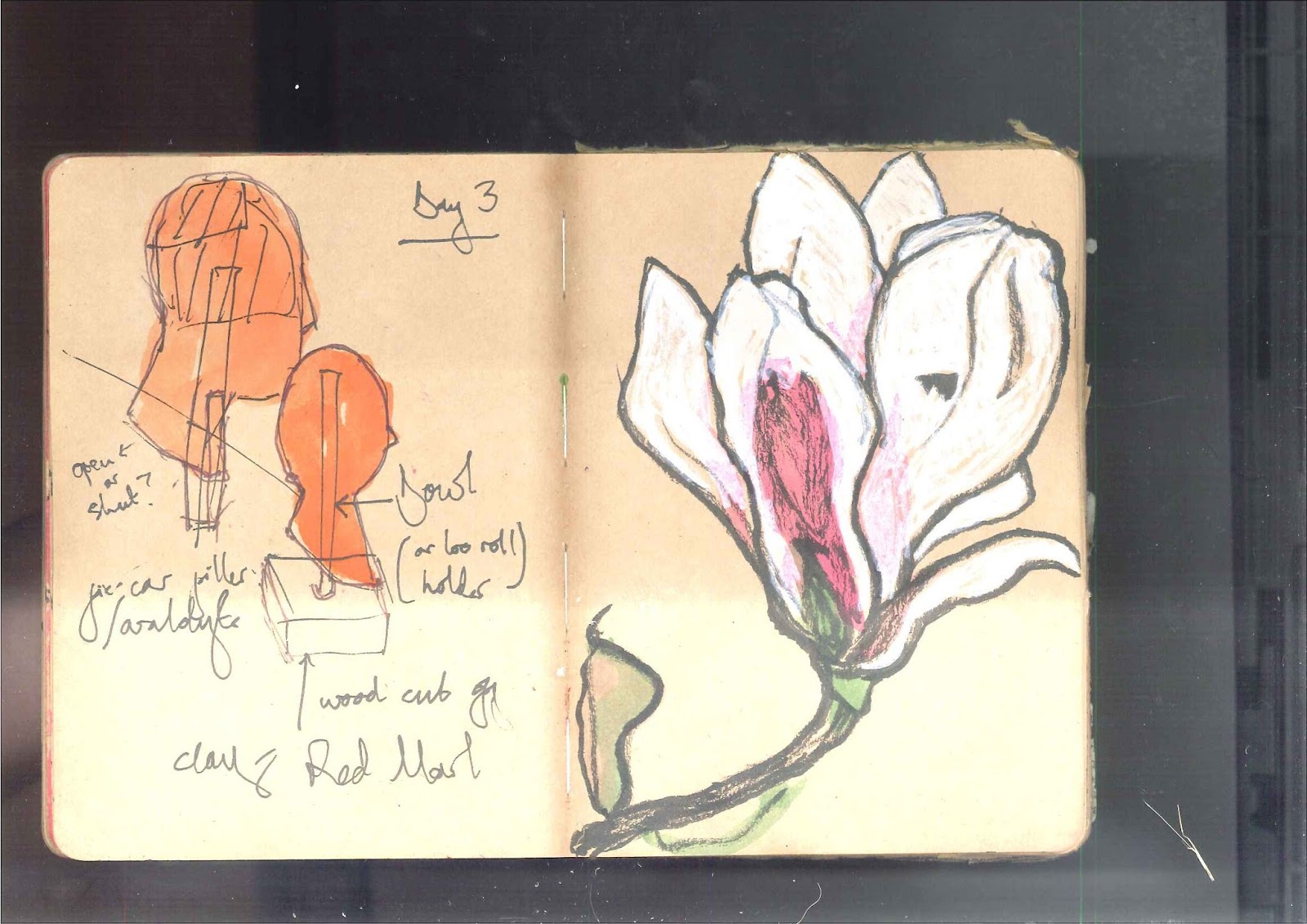 Magnolia in my mother's garden
Whilst I lack the space of a studio to work on bigger projects, I live through my sketchbook, hoarding images and ideas. 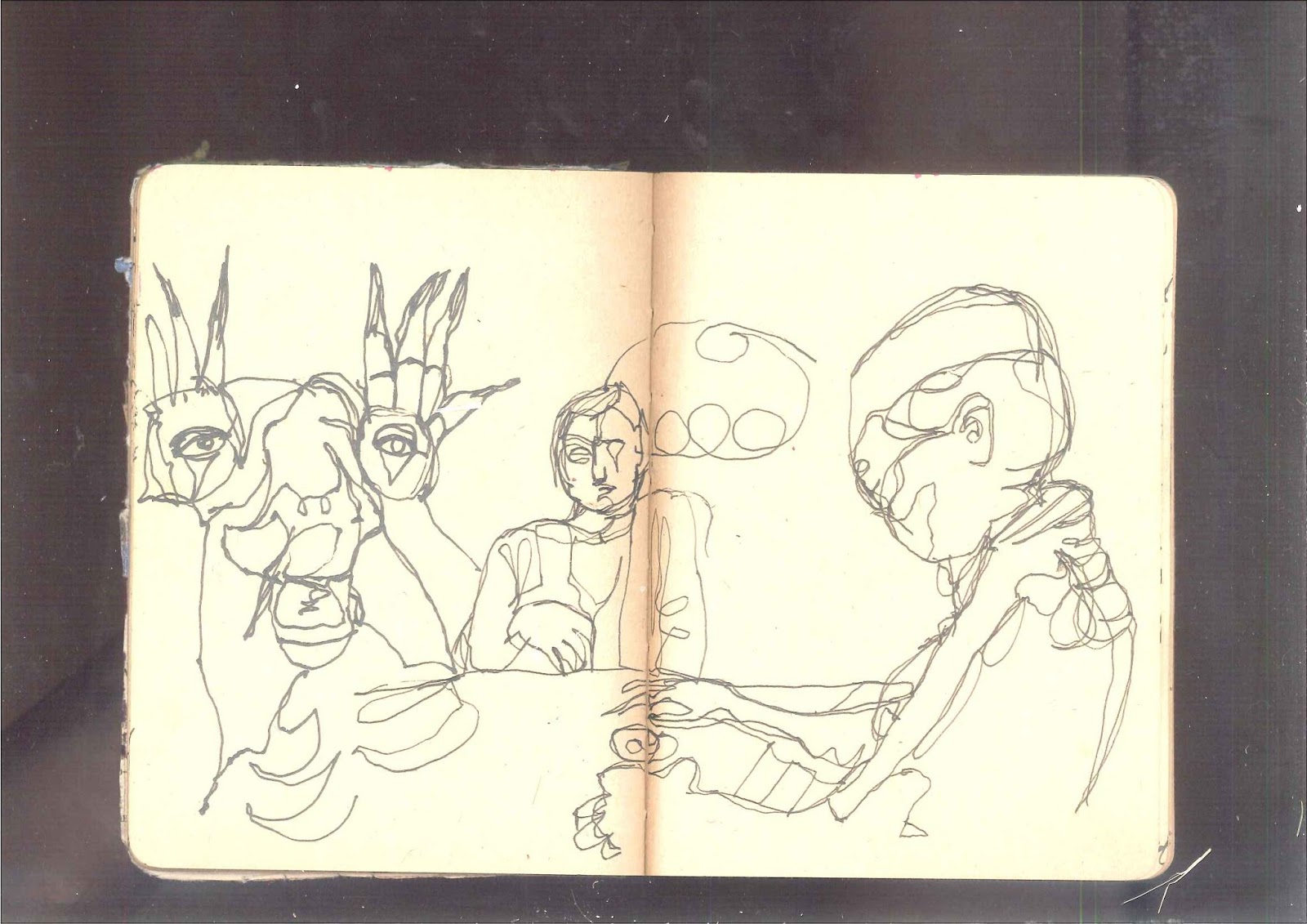