August 31, 2017
Recently I have been researching amulets as part of the Step Up programme with the Wellcome Collection. I am particularly drawn to amulets in the shape of hands. There is a wealth of symbolism in the human hand, from the earliest cave paintings to 'La Mano Poderosa' or 'Hand of God', representing strength and power. As well as studying the hand amulets at the Wellcome Collection, I have also visited the Pitt Rivers Museum in Oxford where there is a large collection of hand amulets. 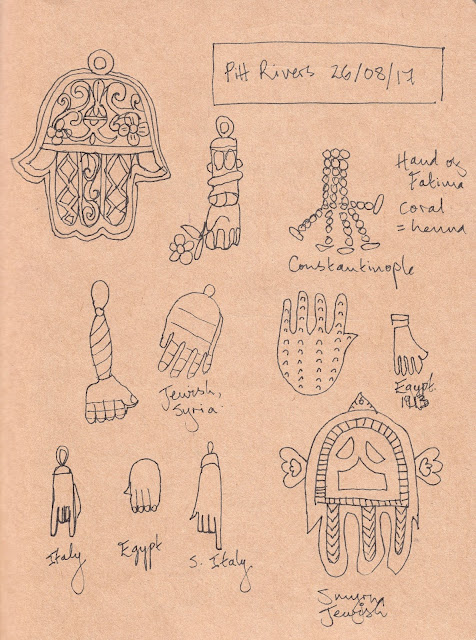 The Hand of Fatima, or 'Hamsa Hand' gives protection against the evil eye and simultaneously represents the five pillars of Islam. The Jewish equivalent is the Hand of Miriam, and Christianity also has a Hand of Mary. Italian 'Higa', or 'Figa' hands also give protection against the evil eye. They are a closed fist with the thumb between two fingers; figa means 'fig', slang for female genitals. 'Mano Cornuta', or the horned hand, also originates from Italy and is said to ward off the evil eye by distracting attention from the wearer.


The use of symbols such as hands in amulets speaks to the subconscious mind. For me, amulets and superstition originate from the same primal place I experienced when I had psychosis. They work on free association of ideas and sympathetic magic, for example, a cluster of acorns resembling teeth were thought to cure toothache. The internal logic of amulets promote a kind of magical thinking which used to be commonplace before the advent of scientific medicine.

I am drawn to the amulets because they are mysterious, their individual origins have in many cases been lost. Their original owners are anonymous to us now. They give a folk history of ordinary people, passed down through word of mouth. The power and meaning they were invested with by their original owners lingers on in the museum setting, and also in their raw state in the archives. These objects contain memories that we can sense but cannot know.
figa hand amulets hand of fatima higa magical thinking mano curnuta pitt rivers museum oxford sketchbook symbols unconscious Wellcome Collection